Closer and Closer to Their Fresh-Air Future 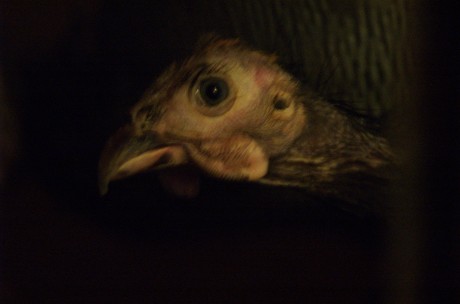 At 8-plus weeks, the Guineas are fully feathered and developing those flabby, weird skin features around their heads, like turkeys.  Aside from their polka dots, they’re not the prettiest creatures, but we’re pretty fond of them and their general mania, just the same.

They’re now occupying the full space of their indoor coop, which we’ve fitted with some new perches that the birds seem to be rather enjoying.  And, with the weather continuing to warm, we preparing their outdoor coop with the hope that it’s only another few weeks before we can start letting them outside some, too.

They seem pretty content where they are, but it’s kinda sad, that aside from a ride in a lucite storage tub from the basement to the barn, the little buggers haven’t experienced the out of doors.  That said, it’s not in their best interest to let them out all at once.  First, they’re not smart, and from what we’ve red, if you don’t ease them into their freedom, they will pretty much walk in a straight line away from their release point until they meet their demise.  Second, it’s still pretty cold here, especially for animals that have spent t

he majority of their short lives under heat lamps.  Third, predators like raccoons, foxes, hawks and coyotes, of which there are lots around here, are of major concern.   We’ve heard of people losing entire flocks of a few dozen Guinea fowl in the space of a few months to such creatures, so we’re being cautious.

Once it’s warm enough to let the Guineas into their fully fenced outdoor coop, they’ll spend a month or so there, learning how to behave outside and how to follow the light to head into the warmth and safety of their indoor coop at night.  As it begins to seemlike they’ve more or less figured things out, we plan on giving them a little more space – fenced around, but not over – with the hope that little by little we’ll be able to allow them more or less free range of the farm by day to feast on ticks to their little hearts’ content.  Whether or not things work out that way, we’ll just have to wait and see, but we’ll keep you posted. 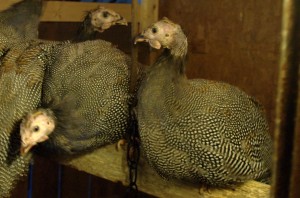 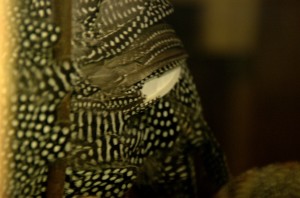 ← Our Froggies Are a-Courtin’
Ramps! →
Feathers and Flannel documents our life homesteading on a small farm 90 miles outside of New York City.