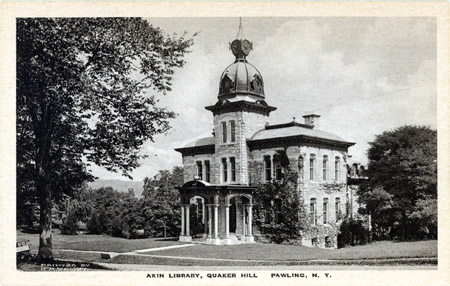 Today was the second day of a quest. We’ve been trying to figure out what to name our house. There is a plaque on the door that says Gazebo Hill Farm, but that doesn’t quite fit (despite the 2 gazebos). We are hoping to find out who originally owned the house, or something historically tied to the area, and use that as the basis of the name. This has led us first to the Dover Public Library and today to the Historical Society of Pawling and Quaker Hill.

The Dover Public Library was interesting, mainly because of the book “Dover: Images of America”. It didn’t tell us anything about our exact house, but we did find that it was in the Oblong Patent – a 61 mile long and 2 mile wide swatch of land running the NY/Connecticut border. The oddly shaped plot of land is the byproduct of a long running border dispute between NY and Connecticut that was finally resolved in 1731. We also found that the area was plagued by counterfeiters in the late 1700’s, the gangs lived in the woods. The most notorious gang was the “Dover Money Club”. If we ever get a pool table set up in the garage, we’ve vowed to name it the Dover Money Club.

The Akin Library of the Historical Society was much more fruitful and interesting. One, the building is amazing. Two, its on Quaker Hill which has a astounding collection of historical homes (including the most ridiculously ornate tudor home I’ve ever see, currently owned by Sally Jesse Raphel), Three, it has Jim. Jim is the librarian there and a wealth of information. He brought us to the copy of the Frederick W. Beers atlas from 1876 and we found the area of our house. However, we were rather stumped that there was something that looked like our neighbor’s house, but nothing for our’s – although there was a  “Friends Church” or Quaker meeting house nearby. After checking another map, looking at a survey of Quaker Meeting houses, and having a conversation with Jim who is a local expert of Quaker meeting houses and the Quakers of Quaker Hill, we came to realize that our house may actually be the “Friends Church’.

Our house, at its core, is one large room with a stairway dividing it in two. All the other rooms are later additions (with no basement). This large room, split in two to separate female and male members, is the standard typology of a meeting house. Combined with the information on the maps, there is a good argument to be made, but nothing conclusive.

Jim gave us contact information for the local historian, fortunately not far from us. We are going to follow-up with her as well as contact Swarthmore College. We found from Jim that Swarthmore is the central place for all Quaker history and as such may have information about the meeting house around our locale.

← One down…25 left
The Guineas at Three Weeks →
Feathers and Flannel documents our life homesteading on a small farm 90 miles outside of New York City.