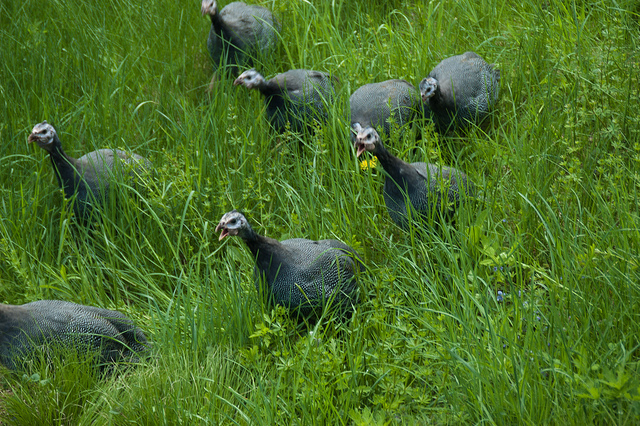 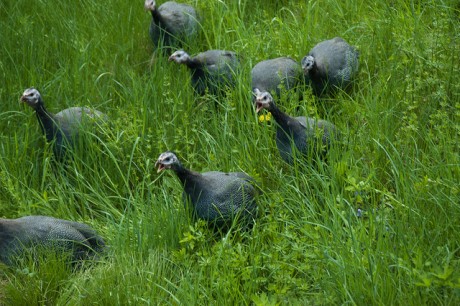 The guineas are free.

We finally decided to let them roam and do what we raised them to do – eat bugs and ticks from the yard. We opened the gates on their coop and it took only a minute or two for them to wander out into the old goat field. We had hoped by setting them free they would quiet down, but quite the opposite, instead they spent the day squawking as loudly possible, apparently signalling to the gang every time they found a bug. Needless to say the noise was continuous.

They didn’t range far, but they seemed to enjoy things. And most importantly, when the light in their coop kicked on at dusk they all came home and roosted in their coop. Well, almost all. Two were no quite happy with their roost inside and instead roosted on the edge of the gate. With a little gentle prodding instead of going in their coop they instead flew up to the roof and roosted there for the night.

The next week went smoothly, with them returning each night…until the rain came. Our theory is that the darkness of the thunderstorms turned on the light-sensor on their coop light and threw the whole system into disarray. So, the first day it was dark and rainy the didn’t figure out how to come home and instead roosted outside. Ominously there was a tremendous cacophony right before sunset, not only the guineas were clamoring, but the frogs, birds, woodchucks, chipmunks and every other form of wildlife. Then it went silent. The next morning we were down to 13.

Another one showed up late the next evening, but were not sure where everyone else went. I’d like to think they have gone off to roost in the trees, but later in the week our white dog came wandering home with a ‘chicken-bone’ in his mouth. He’s not agrgessive – or smart- enought to kill a live bird so he must’ve found some carcass somewhere on the property.

Needless to say its been a little stressful. Losing almost half the flock overnight has left us concerned that they will forget to come home again and the rest of the flock will disappear. Each night the light turns on and we hope that they find their way back, but they are some of the stupidest animals I’ve ever known. They can fly, we’ve seen them on the roof, but a 3-foot high fence can separate one of them from the flock for hours. We’ve also seen them run full bore into a fence, apparently fooled by its transparency.

Our dog is also a threat. She’s been well behaved around them…but that was how she suckered us before and kill a baby chick. We left her unattended for merely a few minutes and she found a hole in the fence and started terrorizing.

Anyway, we are soldiering on. We raised the hens to eat ticks, and they are no good to us just hanging out in the coop, so we continue to let them roam free. My fingers are crossed that eating bugs will raise their IQ to at least the level of their insect prey.

← Ramps!
And then there were none →
Feathers and Flannel documents our life homesteading on a small farm 90 miles outside of New York City.