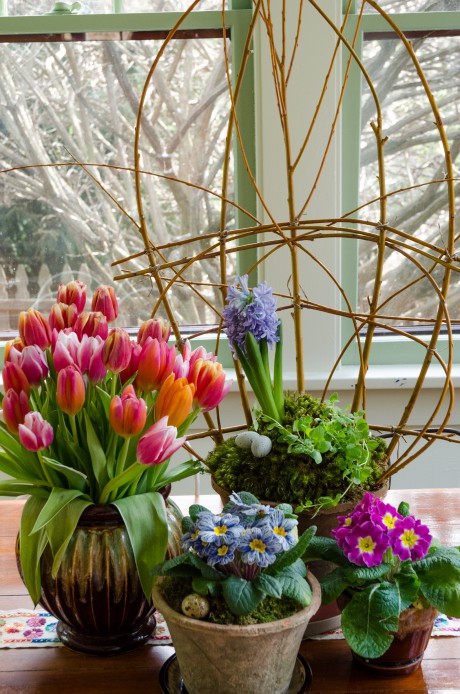 This past weekend we ventured to Westport, Connecticut – about an hour from the farm – to attend a class on making willow garden fences. The class was held at Terrain, a beautiful garden shop created by the people behind Anthropologie and Urban Outfitters.

The class was taught by a lovely master gardener and former art teacher named Angela who is part of the team that builds and maintains the living displays around the store. She began with a quick explanation of the craft and the materials used: Woven fences made from flexible vines and branches have a long history, particularly in the British aisles. Willow is a preferred material for this type of structure in that it is strong yet flexible when it is freshly cut and moist, and it becomes hard but not brittle as it dries within a woven grid.

One thing that we learned in this introduction was that the upright willow canes, if used freshly cut, can remain alive, drawing moisture and nutrients from the soil in which they are stuck, so that the fence will eventually fill out along the tops of the uprights with new, green life. Exciting!

Though any type of fresh willow – curly willow, pussy willow, flame willow, etc. – could be used, for this class we would be using smooth, inexpensive, live “red willow”. We asked if we might be able to put some of the invasive vines of which we have so much at the farm to use in woven fences, and Angela said that while she had woven with both Oriental Bittersweet and Wisteria, these materials became brittle upon drying and therefore yielded a much more fragile, temporary result.

After the introduction, Angela described the basic construction method:

Using a fence she’d begun in a long, gutter-like planter as an example, she showed us to select thick, sturdy pieces of willow as uprights and begin by pushing these firmly down into the soil. Next, another fairly thick, sturdy whip should be selected for weaving in and out among the uprights, low, near the soil. This lowermost horizontal member is bound in place at the junctions with floral wire to provide stability. Lastly, one more substantial piece of willow should be woven among the uprights toward the top of the structure and secured at the junctions. Thus, the solid framework of the screen is made. From there, thinner, more flexible whips can be woven in to suit the desired aesthetic.

Because we had to purchase the container in which we’d be making our willow “fence” and then figure out how to get the whole thing home, we opted for a modest, affordable, terracotta pot. This relegated us to making something more like a trellis than a fence, but it was good practice for trying out the real deal back at the farm.

The real treat was wandering around the beautiful, inspiring space after making the trellis: collecting plants and things that we might want to use, bringing them back to our work table and being able to play around with them and ponder before making our decisions, potting things up and finishing our little project right there in the store.

Though our trellis ended up a bit reminiscent of the rattan chairs in which prom pictures are often taken, with a hyacinth and some greenery, it’s not a bad looking little Easter decoration.

← The Dog Days of Winter
Forced Blooms: A Bright Spot Amid the Late-Winter Gloom →
Feathers and Flannel documents our life homesteading on a small farm 90 miles outside of New York City.