Forced Blooms: A Bright Spot Amid the Late-Winter Gloom 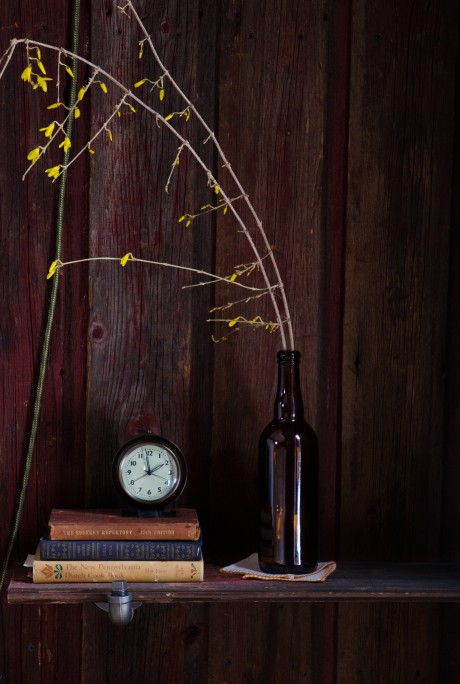 Yesterday, when, for the second day in a row, I spent several hours outside doing yard work, I was heartened by the sense that Spring had finally arrived. Today I awoke to 4 or 5 inches of snow and despair…that is, until I went down to the basement to tend my seedlings and the branches I’ve been trying to force. Peaking under the branches’ trash-bag veil, I caught sight of acid yellow forsythia blooms, and my day brightened.

I’d never attempted forcing before, but this winter has been wearing particularly hard on me, and the promise of a little spring flavor – ASAP – was alluring. So, about two and a half weeks ago, I snuck around the snow-covered yard, snipping whatever had obvious buds: forsythia, Japonica quince, even a little hemlock.

As I had gathered from various sources online, the gist of forcing branches to bloom is to approximate the conditions of Spring with cool but not cold temperatures and plenty of clean, fresh moisture, and to provide them with a little food to ensure that they have the energy to open.

Along those lines, I dissolved some corn syrup and lemon juice* in a pail of tap water, about a tablespoon of each per quart of water, in order to approximate the flower-food powder that sometimes comes in packets with bouquets. I gave the base of each branch a fresh, clean cut at its base with sharp snips and put the branches in the pail of doctored water. Then I slipped trash bags over the branch tops to help keep the buds moist and protect them from our cat, the domestic terrorist, and put them in our constantly cool and damp basement.

Once a week, I’ve swapped out the old water for fresh water with more food dissolved in it, rinsed the bases of the branches thoroughly under cold water, snipped about a quarter of an inch off the bottom of each branch to ensure their ability to eat and drink sufficiently, and put them back in the basement.

Every few days, when I’m done misting the seedlings, I pump a few sprays of water up under the trash bags, too – just to make sure that the buds themselves stay moist and supple.

Written out, it looks like a lot of coddling, but it really hasn’t seemed too bad, and the payoff of seeing those blooms this morning, as the snow turned to hail and sleet outside, was worth every effort.

* I arbitrarily chose to use the corn syrup here because I had a near-empty bottle stood on end in my cupboard that kept falling over, and I wanted to get rid of it. I have also used honey, maple syrup and regular granulated sugar to feed other types of flowers in the past, and it hasn’t seemed to make much difference which I chose, except that the granulated sugar took a bit more effort to dissolve. The same goes for the acid: I’ve used granulated citric acid, vinegar, lemon juice, and I haven’t ascertained that any one works any better than another.

← Willow Fences
How to: Building a Cold Frame →
Feathers and Flannel documents our life homesteading on a small farm 90 miles outside of New York City.