Garlic Mustard: Not Just a Nuisance 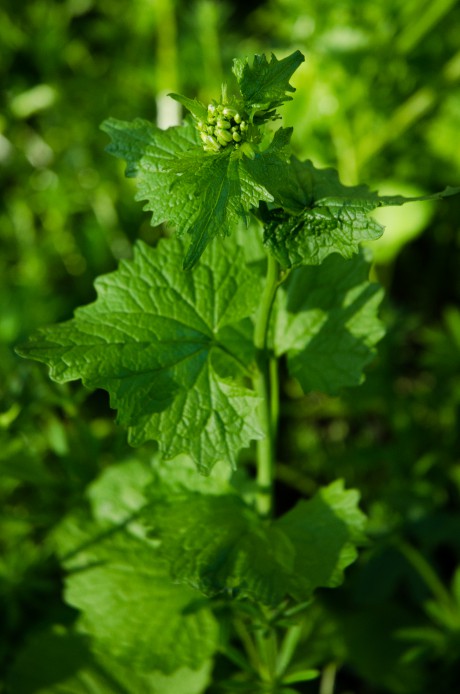 Our second Spring on the farm was when we first identified garlic mustard, and once we had, we started noticing that it was everywhere.  It was one of the first green things up in the Spring, one of the first to flower, and once it flowered for the first time, there were at least 3 more generations to follow in a single summer.  We knew when we identified it that it was edible, but having tried a few of the raw leaves and not finding them particularly pleasant to eat, we didn’t pursue the matter of eating the stuff any further.

Then last Spring our neighbor mentioned that he liked to harvest the first generation of flower bud clusters and stem down to just below the first few tender leaves. These he would treat as he would broccoli rabe – tossed with olive oil and sauteed with a little garlic and maybe some red pepper flake.  We tried them thusly prepared right away.  They were bitter as hell, even more so than broccoli rabe, but they were nonetheless pleasant in small quantities, particularly when used as an accent among other flavors, and for us, anything we can eat out of the yard, especially if it’s a nuisance, is inherently delightful. 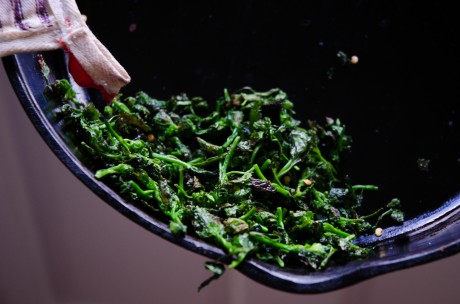 This year we’ve had garlic mustard buds sauteed and paired with burrata, romesco sauce and grilled mushrooms, and tossed with oil and used as a pizza topping, along with red peppers and chorizo.  In both cases, the heat and oil crisped the leaves up nicely, and the bitterness played a pleasant foil to the richness and sweetness of the other flavors.

Although there are, as I mentioned above, several more generations of buds throughout the summer, we’ve found that only the first flush of buds are pleasant to eat, as the heat and dryness that accompanies later flushes renders the buds even more bitter and the stems rather tough.

We’ve also learned that the roots of garlic mustard plants may be grated and used in place of horseradish, though we have yet to try it.

← Our First Asparagus: Worth the Wait
Feathers and Flannel documents our life homesteading on a small farm 90 miles outside of New York City.