The greenhouse is an ambitious project – it is an entire building you know. So as a baby step we are going to build a couple of cold frames, basically mini-greenhouses. We aren’t going to use any of the recycled windows, because they are rather heavy and we want these cold frames to be light enough to be portable. But, even though we won’t be using the windows, we will be using the cold frames to test out a few other materials and techniques for the greenhouse.

The big idea is to build modular cold frame units that are portable enough we can easily move them for use them in various places through the seasons. We would like to be able to place them on top of our raised beds in Spring, maybe to get a jump start on the growing season for our lettuce. Or, possibly sit them directly on the ground in Winter to protect our rosemary from the harsh cold. Also, we would like each unit to work as its own independent cold frame, or be able to chain multiple units together into a single long cold frame to cover an entire raised bed.

Despite the multitude of out-buildings we already have some storage problems. So, not only do the frames need to be light enough that one person can easily move them around, but also built in a manner that they can easily be broken down, folded flat, and stored.

“Light, Modular, and Collapsable” is the design mantra.

The cold frames are a test bed for our greenhouse materials. Based on our tools, our technical competency, and overall cost we chose wood for the frames. This will allow us to try out the new table saw, and the used router (with bench) that we got from my father-in-law. Since the wood will have direct contact with our growing soil we spurned the idea of pressure treated wood, it has come a long way towards being non-toxic but there is still a cocktail of chemicals in it that we wouldn’t want leeching into our soil and food. The next logical option was Cedar, known for it rot resistance, so we went down to the local lumber yard in New Milford to get some. The kindly gent behind the counter told us he didn’t stock Cedar, but could get some in a few days, and then asked us “why Cedar?” After we explained our plans and concerns, he suggested Douglas Fir. It’s much cheaper, and arguably as rot resistant in wet condition because it is a less porous wood and consequently less likely to absorb water. The frames are a perfect opportunity to test out a new type of wood, so we decided to go for it. We just installed a Cedar fence around the garden, so we will have a comparison case for rot resistance.

The other material decision was for the top. We ordered some SunTuf corrugated polycarbonate panels. The polycarbonate, in comparison to fiberglass, is less brittle and easier to work with. It is an option we are considering for the roofing material for the greenhouse, so the cold frame will be a perfect test to see if it warps, cracks, discolors, or gets cloudy, after prolonged exposure to the sun.

We want the sides to also be transparent, but the corrugated poly carbonate isn’t rigid enough in all directions for our needs (it’s too floppy along its length and only rigid along its width). So, we are considering another form of corrugated polycarbonate that is more like corrugated cardboard. This material is also another option for the greenhouse roof, so we can use the cold frames to test this out as well. 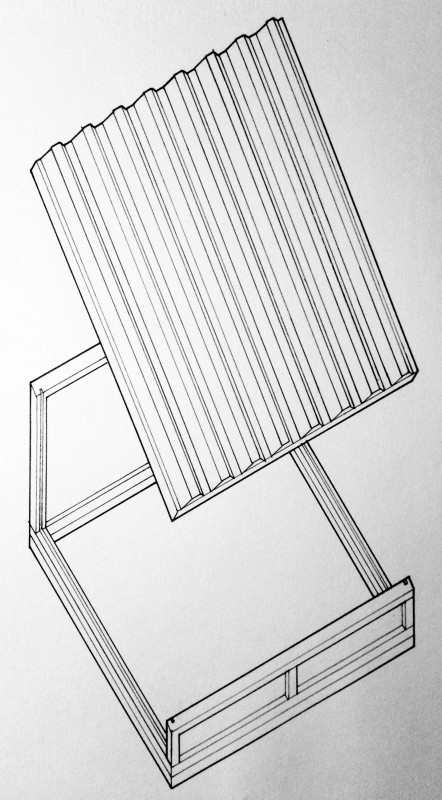 The design is relatively simple. It is a 4 foot square, the dimensions matching the 4 foot grid of our raised beds. The frame is two feet tall in the back and 6 inches tall in the front. Based on our latitude the rake of the top should probably be steeper, but we didn’t want it too tall or it would become unwieldy to move.

The entire frame is made out of 2×2’s, actually we are ripping down 2×4’s to make them so they won’t be perfectly square like 2×2’s. We chose 2×2’s in order to keep the frame as light as possible, but also to minimize the amount of surface they cover when touching the ground.

The front and back are frames with a middle upright for support, routed along the inside edges to hold a 1/4 inch plywood infill panel. These two frames are attached to the base frame along the inside edge with 3 foot piano hinges. The hinges allow the panels to fold towards the center, collapsing the frame into a flat package.

The top is a rectangular frame. Attached to it is the roof panel, ideally hinged along the back edge so it can easily be lifted for watering. The top frame rests upon the front and back frames, slipping into place on a few dowel pegs.

The sides are open, with slots routed along the inside edges. This allows for optional side panels of polycarbonate to be easily slotted in before the top is dropped into place. If two boxes are used in tandem to make a single large frame, the side panels in the middle can be left open. When disassembling the frames for storage the side panels can be pulled out and stacked on top of the folded base and top panel.

We are going to be building it over the next few weeks. I will post an update when it’s done.

← How to: Protecting a Log Splitter
A tour of Green Chimneys →
Feathers and Flannel documents our life homesteading on a small farm 90 miles outside of New York City.